So I had the operation on Monday at the start of this week and have just been recovering. It seems like everything went to plan, except that I forgot to tell the surgeon that I'm flying today. This apparently is ok, except for the fact that I have a two week course of blood thinning injections which I have to inject into my stomach everyday! Not particularly enjoyable.

Went and had the follow up appointment last night and I got to see the damage for the first time. It actually looks pretty clean which is cool and my doctor told me exactly what he had done. For anyone who doesn;t want to know the minor details then I wouldn't read on.

The picture below shows the surface scar I will have. The work below the surface consists of clipping off the bumpy bits on top of the joint and then smoothing it down, then the joint was pulled apart and all the debris was cleaned out, following that some of the ligaments under the toe were snipped so I could increase my range of motion and then all stitched up....niiiiice!

So it's 4 weeks out of any impact sports, and really it won't be until Cape Town (all of Feb) that I'll be back on it again. Good time to get it done and I'll be sure to get some skiing in, in Jan, I hope. 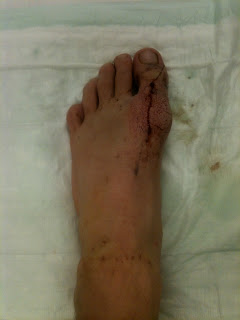 A particular favourite snap of mine below... the colouring makes it look just that little bit more horrific... yum yum! 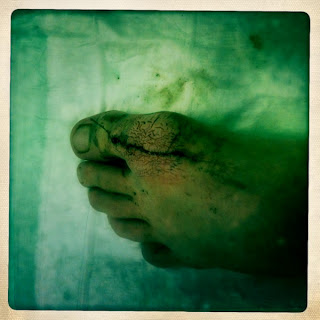